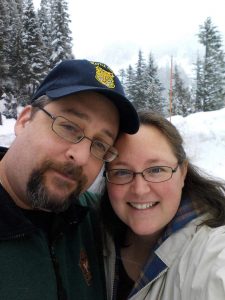 Above: Colonel Tom Coonradt and hus wife Christina who he says she is “as much the leader in her own way as I am.

Greetings Mercs! Welcome to the first-ever addition of Interviews with Major Jimbo! I’m hoping to do many of these with many distinguished personages. Today I have my very first vict….err…interviewee up. So, I’d like to say thank you to the Commanding Officer of The Mercenary Guild: The Four Horseman Universe Fan Association, Our Fearless Leader, Colonel Tom Coonradt for taking the time to get us all read in. I’ve never done an interview before so place nice. Say hi Tom!

Colonel Tom Coonradt (CTC): Hi Tom!! See? I can follow orders too… But seriously, I’m happy to be available for these questions!!

Major Jimbo (MJ): First things first. Tell me a little bit about yourself, Tom. Just what you’re comfortable with.

CTC: Besides my Name Tom Coonradt, I am a fan of writing. I have been a reader since at least 6 years old when I tackled the Hobbit for the first time. My love of books has heavily influenced my life. It was my escape for many years. No matter what I was going through I always had these stories to guide me, entertain me, and to let my mind soar free. Mostly I am just another guy at just another computer trying to have a good time with a hobby that has meant so much to me. Some boring details, I am a 46 year old Police Dispatch Supervisor in Seattle, I was a Corrections officer for several years before becoming a Police Officer. After a couple years in the police I was injured on the job, had my back broken by a suspect in February of 2007. I was medically retired to the job I have now. I have a lovely wife and 2 great children, My son is Autistic but lovable, My daughter is a competitive Gymnast, she even has colleges calling….she is 9. Lol. . My introduction to fandom is an interesting thing. I was I guess what could be called an independant fan. I never really joined any group, I was still struggling to find where I belonged. And being still incredibally socially awkward and …weird. I was afraid to try and join, or be judged. But one day in 1996 I went to a convention where Marina Sirtis was. In Eugene Oregon, I made my own star trek uniform, and did my makeup as a Ferengi. I even got her to agree to have her picture taken of me with her rubbing my EARS! It was a high moment for me in my life and fandom. I decided that I wanted nothing more then to join SFI, as I had been impressed with their structure and uniforming at the con. The person I approached in joining looked at me and my uniform and told me in no uncertain terms that I was not welcome to join at that time. The look on her face was indescribable to me. It reinforced every insecurity I had about belonging anywhere or joining organized fandom. It has actually haunted me for a very very long time. Then in 2011 I found another fandom to join. I jumped in with both feet. Spending several years in the senior leadership there My goal was for no one to ever have to go through what I did just trying to join a group. When given the option to start a NEW fandom I jumped on it. And my goal remains the same. To make a place where people who love THIS universe can enhance their fan experience, interact with the authors, and just BE with like minded people.

MJ: So Tom, help me out here. I mean, I love the Four Horsemen Universe as well, but I would have never thought to start a Fan Association. Can you tell me what made you decide to found a new club to celebrate these books?

CTC: This is not something I decided on. Back in July of 2018 I was approached by one of the authors about starting an official fan organization. I was hesitant at first, I had not even read the books. So I started researching. In the meantime I became a huge fan of not only the books but of the authors themselves. I got intrigued at the idea of Mercenary companies and fandom. I saw a freedom there to explore a couple ideas that other organized fandoms just don’t have. Being Mercenary companies offers the opportunity to really control your specific chapter. Take it in the directions the fans in YOUR area want. Customize uniforms, patches and how its run. With just a few guidelines to keep you in line with the parent organization. Also the new concept of accepting CONTRACTS. Things like as a company recruiting so many people, going to whatevercon, raising all the dollars for charity. Community service, helping others, helping members, being social. These contracts are a new way for chapters or individual members to gain recognitions. Basically I decided to go for it because I saw this opportunity to provide the joy I have found in fandom to people that otherwise might not have it.

MJ: Awesome, Tom. So who among the authors have you spoken with about it? What have they said about what you’re doing?

CTC: Well, like I said, they came to me. But there is a real excitement among the “Horsemen” what the authors are known as in the Fan Org. They are humbled to have the fan base they have and really want to provide an enhanced fan experience. They love interacting with everyone at Cons, they are passionate about the books. And they really want to be as accessible as possible. They are all members of the org and will be keeping us on the straight and narrow. Lol!!

MJ: That’s good to know, Tom. Of course, one of the major purposes for joining any fan association is to have fun, but does The Mercenary Guild have any other goals?

CTC: Its about more than fun. Its about community. As I said my goal is to enhance not JUST the fan experience, but also the AUTHORS experience. To build a structure for both to gain enjoyment, friendships, insight into the universe, and foster that since of camaraderie and involvement. We are not there to replace any other fan group, or to even be JUST ANOTHER GROUP. But to supplement. To be there for people who would possibly otherwise never be exposed to organized fandom. We will be providing a structure so one really feels part of the universe. People named in the books for example can even play as themselves!

CTC: The two big differences is the unprecedented freedoms that Chapters will have. They will agree to certain minimum standards and guidelines, but will be franchised and have the freedoms to pick their uniforms, decide how they promote. Choose their activities and working with the exciting new Contracts system, they will choose what goals they want. The Commander of a Company will basically be the CEO of that chapter. But honestly there will of course be similarities with some other orgs. Why reinvent the wheel?? There will be optional exams, and a structure. Uniforms and patches, and some of the other things associated. What WE offer that is totally different is the CONTENT. We are the FOUR HORSEMEN UNIVERSE FAN ASSOCIATION. We offer THAT experience. We are not big flashy spaceships, or Clone Warriors in shiny Uniforms. We are MERCS. Professionals that get down and dirty. We kill aliens and get PAID. The other thing we offer is that closer interactions with the authors that provide THIS set of stories. Their insights, their thoughts. Their inspirations. Their excitement for what they have to offer. So while there are other fandoms out there… There is only ONE Four horseman universe.

MJ: That’s terrific. So, let’s talk about the chapters for a bit. What do you see your chapter make-up looking like. Are you going to being forming chapters right out of the gate? Will the fans be able to be part of units straight out of the books?

CTC: Fans will be able to join in March. But there will be a 30 Day period before we start setting up chapters. In our infancy we want to ensure that no new member is lost in the paperwork. Then we will be putting out the Chapter (called Company) charters. One neat thing there, all companies founded in 2019 will be officially known as an Alpha company and will have a yet to be determined device for their uniforms, as well as an AUTHOR SIGNED charter listing them as such. These companies unfortunately will not be any listed in the books. Commanders will chose their own name, either as a ground unit or as a space based company. People that have been named in the books as one of the Horseman companies will be able to “Play themselves” and will be members of the appropriate company if they choose.

MJ: Interesting. So Tom, as we’re wrapping this up, what else would you like the people to know?

CTC: I would like to thank everyone in advance for their patience. We will I’m sure have growing pains. And I know information is coming out slowly. We have built a great core team of leadership that are working very dilligently and hard to put this together for our ambitious launch date. I think it will be all worth it!!

MJ: Excellent. Thanks again for taking the time to let us all know what’s going on. Hopefully we’ll see you again on Interviews with Major Jimbo!

This site uses Akismet to reduce spam. Learn how your comment data is processed.