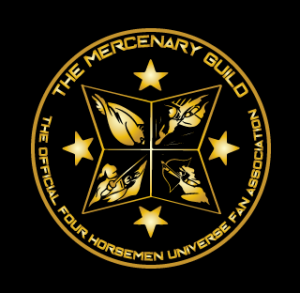 I’m diggin’ it. How about you? I mean, it looks sweet right? *SIGH* Yes, that up there ^^^^. It’s the new logo for The Mercenary Guild: The Official Four Horsemen Fan Association and that’s what it looks like. Ain’t she puuuurty?

All trash talk aside though, I am seriously stoked. Those, if you missed it, are the logos of all four of the Four Horsemen. It’s an officially licensed design, so we’re not up to any naughtiness. I’m happy to say that because a.) I’m not a thief and b.) It’s awesome knowing that The Horsemen (for those that don’t know, The Horsemen are the core authors of the Four Horsemen Universe.) approve of something that a guy like little ol’ me is part of.

I have it on good authority based on unnamed sources close to someone important that there are some Merc Guild patches coming at some time in the not-so-distant future. I’ll have details of that for you as soon as they’ve been confirmed (and somebody gives me a link. Gonna need one of those.)

For now, though, just bask in the awe that is the wonders of the logo and know that I’ll be back with further news as soon as I can.

Have a profitable day, mercs!

This site uses Akismet to reduce spam. Learn how your comment data is processed.